With over 86 million subscribers and reported earnings of $3 million a month, Mr Beast is a huge YouTube star.

But how does he do it?

Each Thursday I'll send you a new content marketing or SEO case study directly to your inbox.

The Low-Resolution Viral Formula (That You Can Steal) 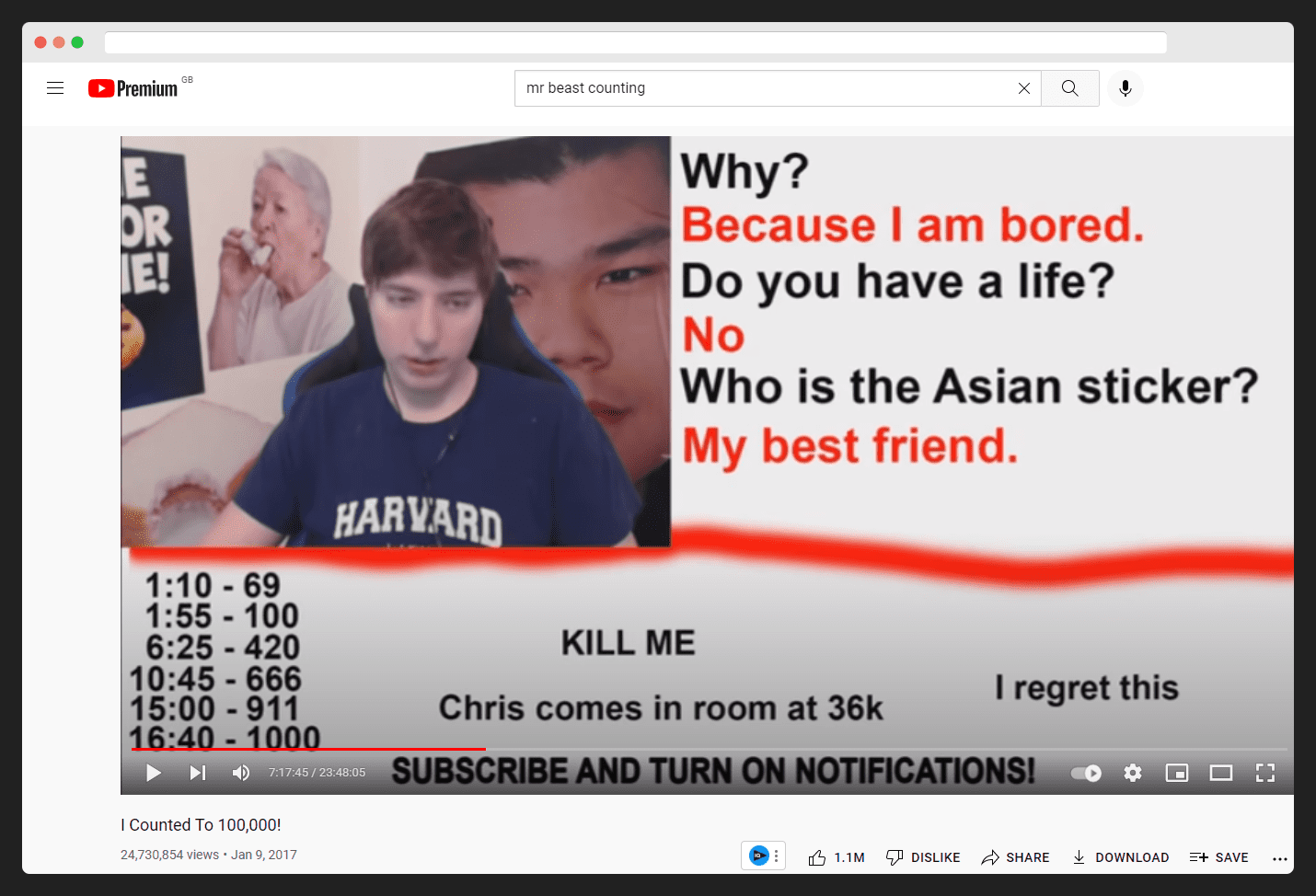 It’s something we can all do and yes, that’s all there is in the 24-hour long video.

You’d be excused for thinking that humanity has lost the plot.

The thing is, Mr Beast has tapped into the power of effective messaging.

And that’s his secret.

For communication to cut through the noise and be effective, generally it must possess one or several of these elements:

And that’s the fuel behind almost all of his videos. 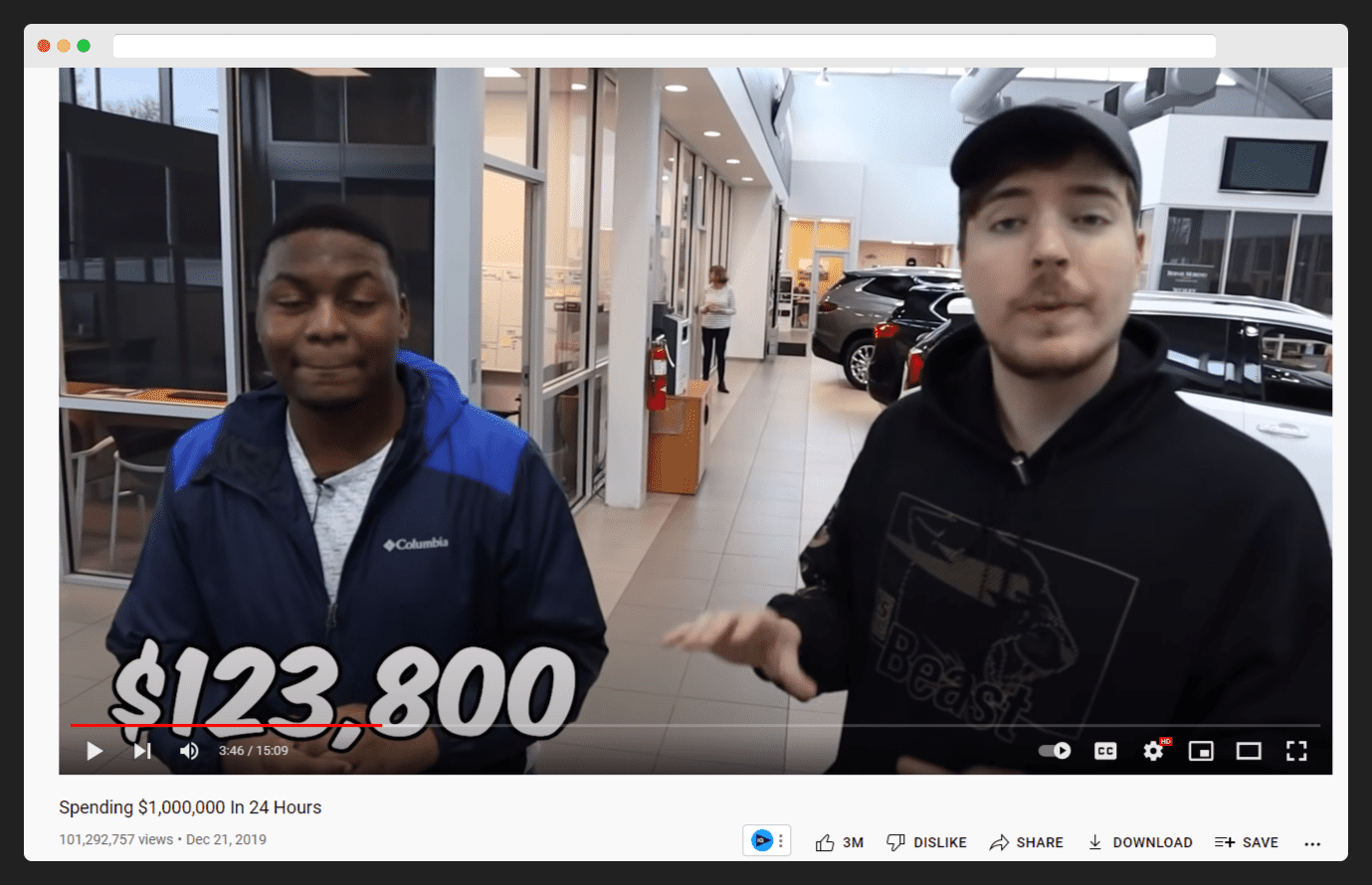 A video of him spending $1 million in just 24 hours. 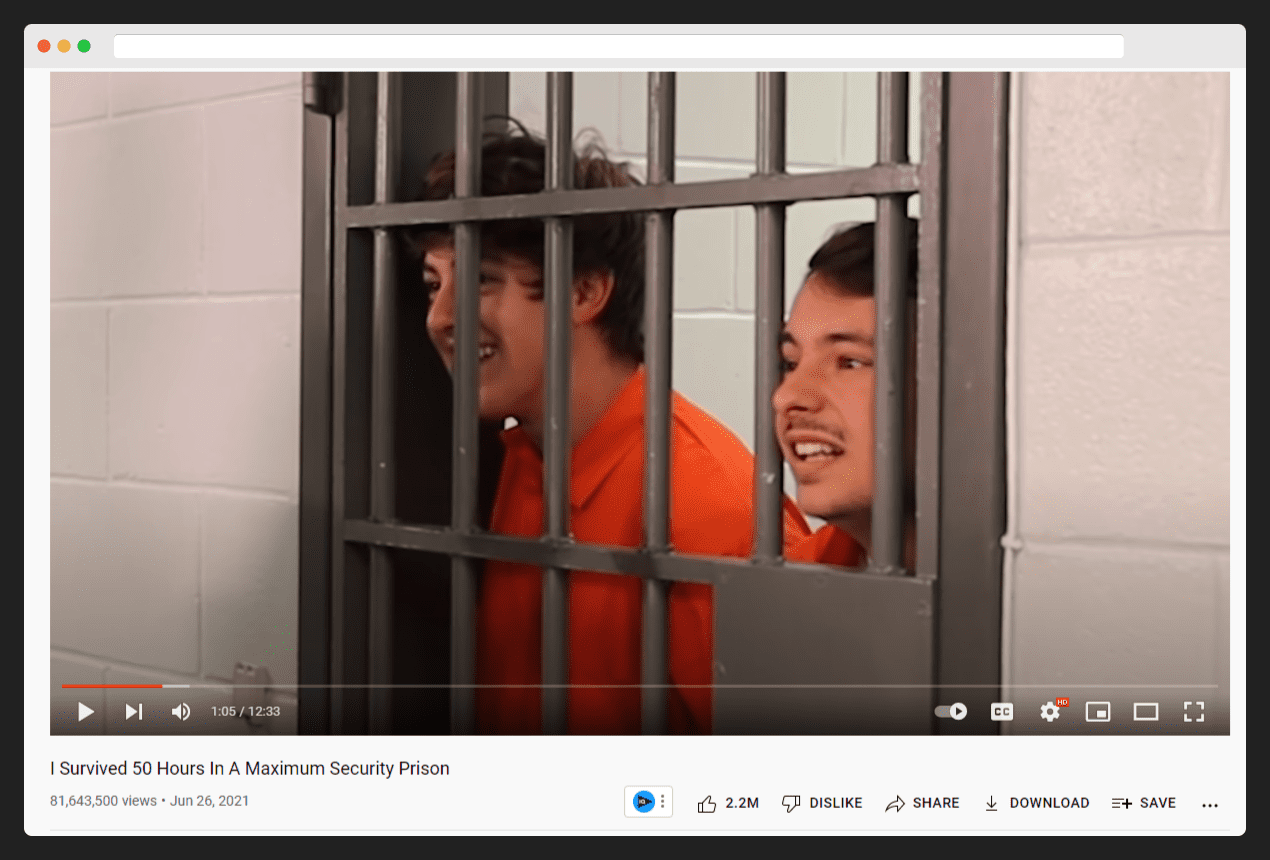 A video of him surviving 50 hours in a maximum security prison generated 81 million views.

The key here is that Mr Beast is doing what no rational person would do and, as a result, people are entertained.

Well, they don’t want to miss out on whatever he’s going to do next.

But sure, anyone can create effective messages. How does he get people to watch?

Well, it’s all about the title.

Here are the titles of Mr Beast's most popular videos:

The thing that grabs the attention of the viewer is that every title and video subject makes the viewer say:

But these titles are wrapped around a series of core frameworks he seems to use all of the time.

But there’s more to this than just titling; these videos create a cycle of continued viewership, and it’s all around the type of content he creates.

So how can you steal this?

If you want to succeed online and on YouTube, the trick is to look for frameworks that allow rapid growth.

And it's pretty easy to do. 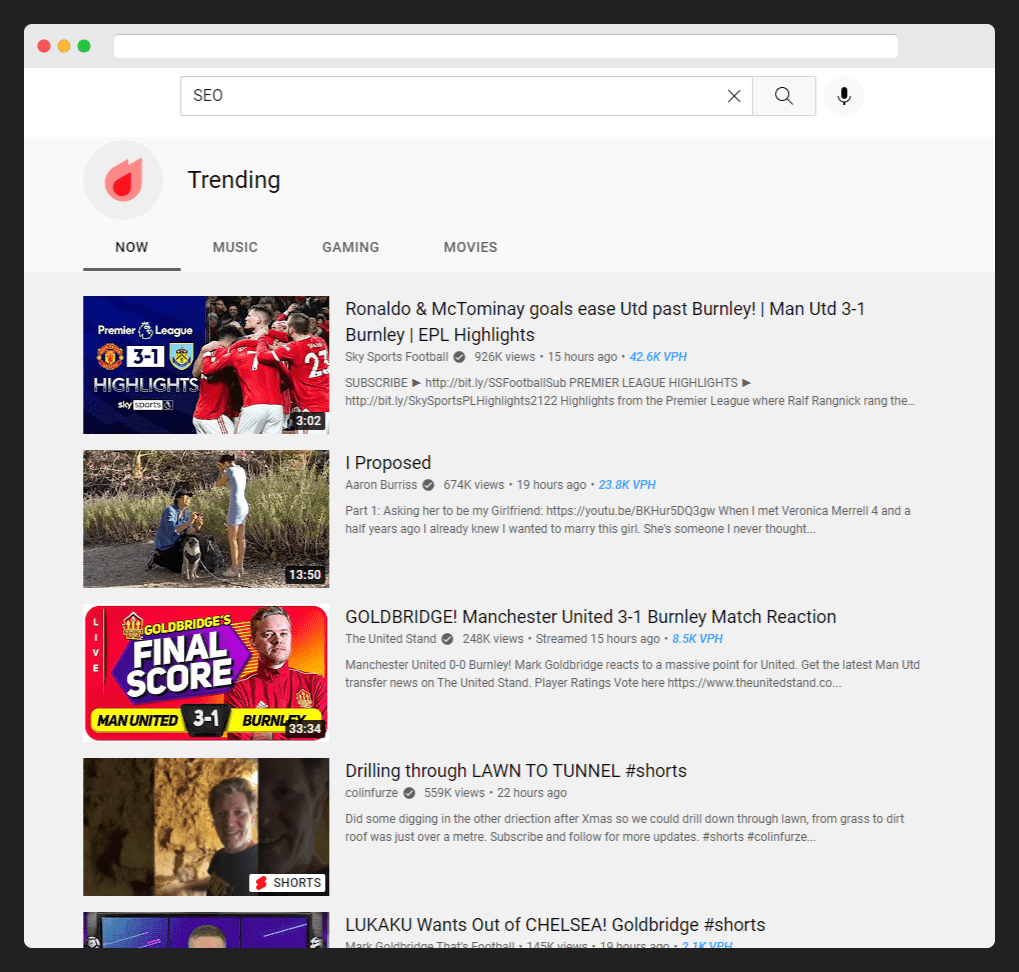 Start watching some videos, and try to notice patterns in the way they are put together.

And this is important: write them down so you don't forget.

Not all frameworks will work for your content or distribution method, but the more frameworks you have in your standard toolkit, the higher the chances of success.

But you want to look at the content and see what framework is behind it.

This vlogger uses surprise as a framework.

The reason people love it is because it's rare to see something like this on the internet, and honestly, they're not expecting it.

"Surprise: I Shocked a Homeless Man By Giving Him a Mansion".

You can see that this type of framework is successful because it doesn't happen very often, people are surprised and then they share it with their friends or family, leading to more views.

OK, I know what you're thinking… "I write content, I don't make videos".

Well, here's how you can apply the Mr Beast approach to your content.

How to Create Written Content (the Mr Beast Way)

As we mentioned earlier, the title of your piece is probably the most important factor in getting people to read it.

If you want more views, clicks and shares, then A/B test titles until you're confident that you've created one that will perform.

But there are some things you can do to make an impact.

Here are some examples.

"This Man Stole Millions Of Dollars From The World's Biggest Company And All He Got Was 18 Months In Jail".

"How I Became An Expert (insert job) After Only 20 Hours of Study".

By using the first headline, people instantly want to know how he stole money from a company and why he only got 18 months in jail.

And the second headline grabs your attention because most people think you have to work for years, studying full time, to become an expert on a topic.

Generally, we are quite lazy when it comes to blog post images. But look at how Mr Beast uses images.

If you saw this you'd want to click it.

So try to choose your blog content images using the same approach.

Step 3:  Make the Content Entertaining from the First Scan

We know this thanks to eye-tracking studies, so don't create content that looks awful.

It must look interesting and worth reading from the first scan.

To do this, add eye-catching images and create unique, catchy sub-headers so that the reader would be able to tell the story of the blog post, just from a scan.

This is known as information scent.

The reader is looking at the content and judging to see whether it’s worth their cognitive resources.

Of course, you need to write great content, but that's a story for another day.

Mr Beast knows a lot about content creation that you can steal, but the internet is full of examples like that.

This is why I urge marketers to study the internet and not just consume it.

Look at content with an enquiring mind and you'll soon pick up tips.

The way Mr Beast uses stories and frameworks in his content is great, but he’s not the only one doing it.

Analyse other content creators and see what you can learn from them.

Each Thursday I'll send you a new content marketing or SEO case study directly to your inbox.

Please log in again. The login page will open in a new tab. After logging in you can close it and return to this page.